Each page of the calendar is illustrated with captivating photos taken by graduate students. 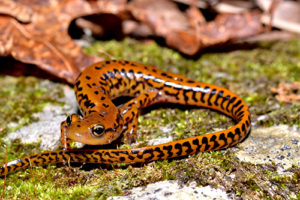 Long-tailed Salamanders are often yellow to red-orange with black spots in coloration. They are easily identified by the herringbone pattern on their tail. During the mating season both males and females have cirri, however male’s cirri are much more prominent. Oviposition is typically aquatic, however non-aquatic eggs have been found in areas with high humidity, such as in caves. Adult Long-tailed Salamanders are often cited as being invertebrate generalists with the majority of their diet being made up of various small insects. 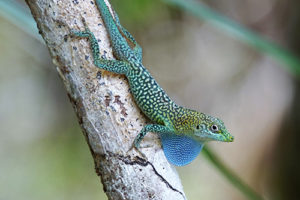 Photographer: Nicholas Herrmann is a Ph.D. student in the Museum of Comparative Zoology at Harvard. He is interested in studying patterns of selection on Anolis lizards to better understand the evolutionary consequences of interspecific competition and ecological release. Harvard’s Museum of Comparative Zoology houses one of the world’s largest collections of amphibian and reptile specimens.

Anolis conspersus is found throughout the island of Grand Cayman. There are three described male color “morphs” that typically occupy distinct areas on the island, although there is some spatial overlap between them. The species is morphologically and behaviorally adapted for locomotion on the narrow branches and leaves of the canopy. Nonetheless, it is often observed on large trunks closer to the ground, particularly in areas where other Anolis species are absent. Like most other Anolis lizards, A. conspersus has a broad diet consisting predominantly of small insects. 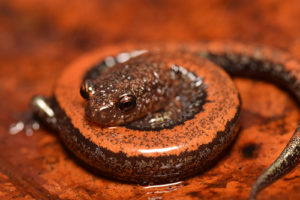 The Eastern Red-back Salamander is a common species of salamander throughout much of the eastern US. This species is interesting as it is polymorphic, and has three common color morphs, of which the striped morph is most common. For much of their range they are the most abundant salamander. 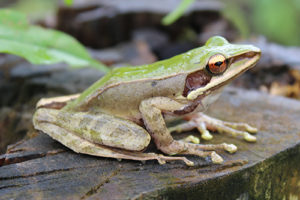 Photographer: Drew Davis is a PhD Candidate studying how biotic and abiotic stressors affect amphibians at both individual and population levels. He has mainly focused on how agricultural tile drainage and environmental contaminants affect stress hormones and disease prevalence in larval amphibians as well as how these stressors affect the diversity wetland-breeding amphibians across sites. He has also avidly worked to increase our understanding of the distribution and natural history of amphibians and reptiles across South Dakota, primarily through the collection of voucher specimens, and work to share information with the public. The Department of Biology at the University of South Dakota has three faculty members who have worked on a wide variety of topics with amphibians and reptiles. Dr. David Swanson has worked on amphibian freeze tolerance and overwintering physiology, Dr. Jacob Kerby primarily works with amphibian disease ecology and ecotoxicology, and Dr. Christopher Anderson works on functional and biomechanics of lizards, though primarily chameleons.

of ranid frog in the Philippines. This species is frequently observed along stream banks on rocks or vegetation from low- (200–300) to high (1700–1800 m) elevation forests. Previously, this species was thought to occupy a limited range on Luzon Island. However, surveys across Luzon Island within the last decade have shown that this species has a much larger distribution than previously known. Discovery of these numerous populations warranted a downgrade in IUCN conservation status from “Near Threatened” to “Least Concern”, highlighting the importance of a thorough understanding of species distributions. 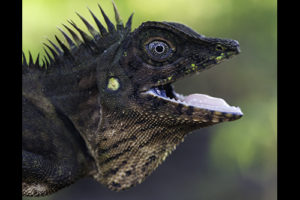 Photographer: Nicholas Huron is a first year doctoral student at Temple University in Philadelphia, PA and a member of the Integrative Ecology Lab in the Biology Department. His research interests are centered on disentangling the drivers of herpetofauna community assembly, with a special focus on communities found in biodiversity hotspots.

Gonocephalus sophiae is endemic to the Philippines, but has a distribution that spans several islands therein. Individuals can be found sleeping on tree trunks and limbs in secondary growth forest. A recent study suggests that this clade may contain several as-yet undescribed species (Welton et al. 2016). 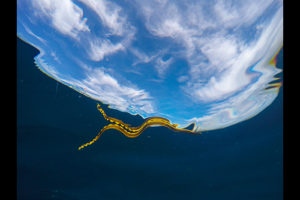 This species of true sea snake has one of the largest ranges of any vertebrate animal on the planet.  They can be found in the tropical waters of both the new world and old.  The yellow-bellied sea snake is completely pelagic and never comes to land, not even to give birth.  This picture was taken while conducting research on their drinking behavior.  It was recently determined that although this species possesses a salt gland they are unable to survive by drinking sea water. Interestingly, these snakes drink from freshwater lenses that form at the surface of the ocean after heavy rainfall. 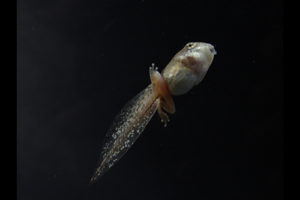 The adult individuals of gray treefrogs are morphologically very similar to Hyla chrysoscelis (Cope's gray treefrog), although their call is slightly different. Tadpoles of the species complete the metamorphosis in approximately six weeks, but they are very plastic and can either increase or decrease their development based on temperature, resource availability, and predators. They can be eaten by many creatures, from invertebrates to fishes and snakes, and they can change their behavior and even their shape based on the predators in their environment. This one pictured is about to leave its pond! 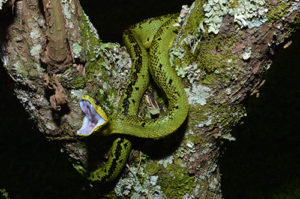 Photographer: Daniel Hughes is a PhD student at the University of Tezas El Paso. The graduate school at UTEP offers Masters and Doctoral programs covering diverse research topics in Herpetology, with projects ranging from rattlesnake telemetry in the Chihuahuan Desert to tree frog sytematics in central Africa. The UTEP Biodiversity Collections has a wide range of herpetofaunal specimens, with a regional emphasis on species from the southwestern United States and Mexico.

The Great Lakes Bush Viper is a small, stout snake that prefers wetland and meadow habitats at higher elevations and montane forests ranging up to the bamboo zone. 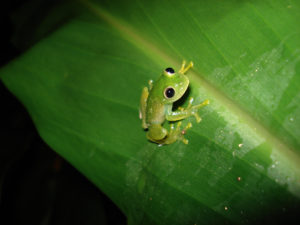 The species Vitreorana uranoscopa is from the genus of the glass frogs. Their skin is so clear you can see their organs! This small treefrog measures around 1 inch and occurs from the east and southern Atlantic Forests in Brazil to Argentina. Males usually call from leaves above or near running water. Females lay eggs on those leaves, and hatching tadpoles fall into the water below where they complete their development. 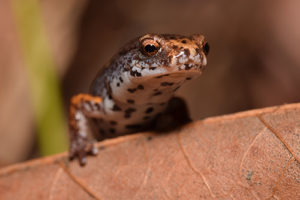 Four-toed salamanders are the only species within the genus Hemidactylium. They have rather specific habitat needs and a patchy distribution. Four toed salamanders are known to guard their eggs, and it is not uncommon to find one curled up with a clutch of eggs in a sphagnum bog. This individual was an exciting find as I found it crossing a road on a relatively clear and rainless night in southern West Virginia. 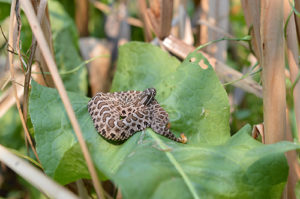 Photographer: Joshua J. Mead is a Graduate Research Assistant in the Department of Biological Sciences at Fort Hays State University. His thesis research focuses on the spatial ecology of the Western Massasauga (Sistrurus tergeminus) in a large interior wetland. Fort Hays State University has several students studying herpetofauna in the Department of Biological Sciences under Dr. William J. Stark.

The Western Massasauga is a small species of rattlesnake that occurs throughout the eastern two thirds and southwestern corner of Kansas. In Kansas, this species reaches its highest densities in wet meadows, where they use crayfish burrows for hibernacula and feed predominantly on anurans and small mammals. Maternal attendance of neonates was documented at this site in 2016, when two young that had not yet achieved their first shed were observed in a burrow with a radio-tagged female. 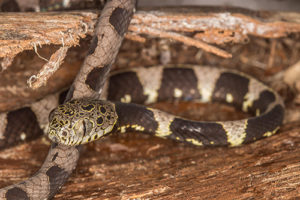 Photographer: Pascal Title is a PhD candidate at the University of Michigan, working with Dr. Dan Rabosky. His research focuses on the spatial dynamics and diversification of Australia’s lizard and snake fauna. The herpetology program at the University of Michigan is part of the department of Ecology and Evolutionary Biology, a program with a great breadth of research topics and talented students and faculty. The herpetology program is housed in the Museum of Zoology, where the herpetology collection is one of the largest in the country and provides an invaluable resource for herpetological research.

Dipsas indica is a neotropical arboreal snake that specializes on snails.