Where do you work?  I work for the U.S. Geological Survey, Western Ecological Research Center, Dixon Field Station in Dixon, California.

How did you get there?  I grew up on a farm in Wisconsin catching frogs and snakes with my brother. When I was eight years old, I knew I wanted to be a herpetologist. Then a well-intentioned high school guidance counselor steered me away from that career path and toward a career in medicine or physical therapy where I could “find a job.” Fortunately, I went to Carroll College (now Carroll University) because I wasn’t quite sure that was the path for me and I thought a small liberal arts college would keep more options open. Was that ever the right decision! The professors there got to know me and encouraged me to pursue my interests, but it still took until the second semester of my junior year to find the right path. I was a bit behind on my ecological coursework, so in my senior year I took every ecology and conservation class that I could, and I applied broadly to positions in ecology to make sure that’s what I wanted to do. One of these was as a volunteer intern for the Milwaukee Public Museum radio-tracking head-started juvenile Blanding’s turtles (Emydoidea blandingii). I really enjoyed that and ensuing herpetological work and decided to pursue a Ph.D. in the joint lab of Henry Mushinsky and Earl McCoy at the University of South Florida. While there, I studied spatially-structured predator-prey relationships between coachwhips (Masticophis flagellum) and Florida scrub lizards (Sceloporus woodi), but Henry and Earl’s large lab gave me the opportunity to help on diverse projects ranging from the effects of groundwater pumping on amphibians in wellfields to gopher tortoise (Gopherus polyphemus) translocation and sand skink (Plestiodon reynoldsi) genetics. Other than continuing research, I wasn’t quite sure what I wanted to with my Ph.D. as I neared the end of graduate school, so I applied broadly to postdoctoral positions, small universities and colleges, and government jobs. The position that best matched my interests and skills coming out of graduate school was analyzing data and writing papers using a long-term dataset on giant gartersnakes (Thamnophis gigas). I saw the position as an opportunity to beef up my experience and publication record, and I initially treated the position as a postdoc. I ended up really enjoying working for USGS, and I stuck around and kept writing proposals (to keep my position funded!) and papers. Eventually I was hired to a permanent research-grade position.

Was there any particular hardship that you had to overcome to work in your position?  Most of my hardships have been in my own head. I often go through periods of self-doubt, which when paired with perfectionist tendencies can really stifle productivity. I also didn’t start publishing until the very end of my Ph.D., which didn’t help my job search. The other main hardship I faced was a trio of hurricanes in 2004 (Charley, Frances, and Jeanne) that converged on my field site during the first year of my fieldwork for graduate school. On the bright side, I now excel at digging trenches and installing drift fences!

What advice do you give to someone interested in your profession? What advice might you have for someone from an underrepresented group who is interested in entering your field?  Finding a permanent research position in federal agencies can be difficult, so patience, perseverance, and hard work are essential. My initial position wasn’t at a very high grade level, but it allowed me demonstrate my ability to do the things I needed to do to be a successful research-grade scientist. I have many people on my research team, from temporary technicians to crew leaders and project managers to research associates, so there are opportunities to work as a federal herpetologist at many levels, though permanent openings are uncommon. Often the hardest thing is to get your foot in the door. Many of my most valued employees started as technicians and were willing to work on other projects when our field season ended. By showing that they were flexible and dedicated, they were able to stay employed by different scientists at my field station until a more stable position opened up in my lab.

I recommend that anyone seeking to get a job as a federal biologist, but especially those from underrepresented groups, contact someone who does research that interests them. I’m always excited to share my story about how I went from an 8-year-old wanting to be a herpetologist, the various bad (and good!) advice I got along the way that temporarily derailed those dreams, and finally ending up in a career that I enjoy so much I can’t imagine doing anything else. And I think that the sooner you talk to someone, the better. Many of our underrepresented groups aren’t even aware that a career in herpetology is an option, and the earlier we open the door, the easier it is to walk through.

What’s your favorite herp?  It’s really hard to choose. Fox snakes (Pantherophis vulpinus) were my first favorite snake, but it’s hard not to be enamored with the coachwhips (Masticophis flagellum) I studied in graduate school.

Why are you an HL member?  The Herpetologists’ League plays an important role for herpetologists by providing a venue for publishing our findings and exchanging ideas at annual meetings. My graduate co-advisor, Henry Mushinsky, was always very involved in herpetological societies and annual meetings, and I guess his example of membership and service to professional societies rubbed off on me.

Is there anything else you would like to add? I think it is important to raise awareness of the natural world to kids that don’t have the opportunity to explore it. I am acutely aware of the influence my childhood had on my career choice, and I think a part of our diversity issue in herpetology is an awareness issue. While in graduate school, my wife and I would take middle-schoolers from the charter school my wife ran in urban Tampa on kayaking and camping trips as a reward for improved behavior or academic performance. The reactions of the kids to these new experiences were often unexpected, and sometimes entertaining. (For example, the students started blowing their emergency whistles like crazy when they saw a doe and two fawns on a canoeing trip. Apparently, a teacher had told them that deer kill more people than bears. Somewhere along the line, the part about the deaths being caused by car-deer collisions was lost.) Sharing your passion with a child is a very rewarding experience, and you never know where it might lead.

Is there a good caption for your attached photograph?  My son, Jamil, took this photograph on a hiking and fishing day trip. Usually it’s the child that is easily distracted, but with foothill yellow-legged frogs around, I was the one playing in the water! 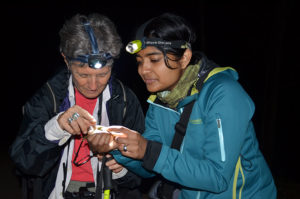 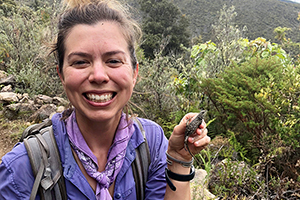 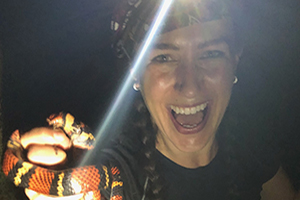 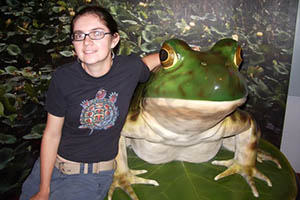 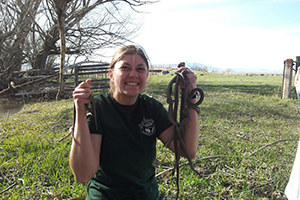 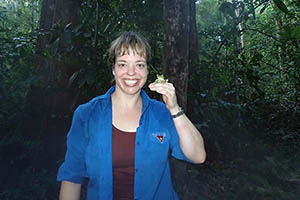 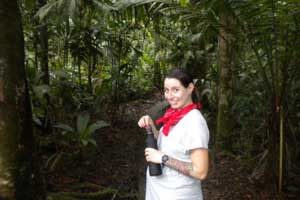 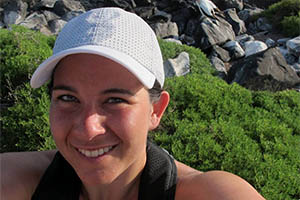 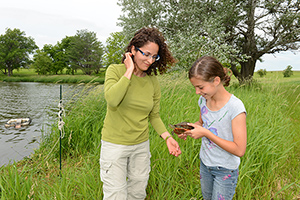 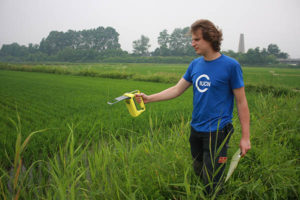 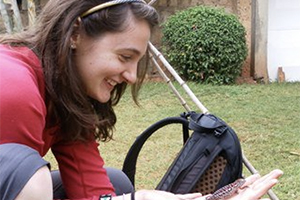 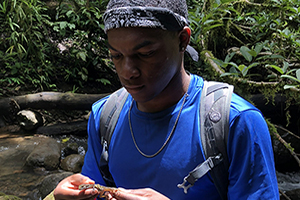 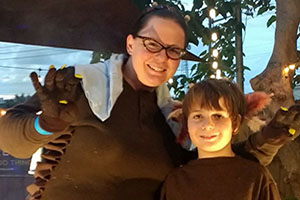 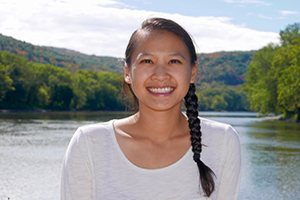 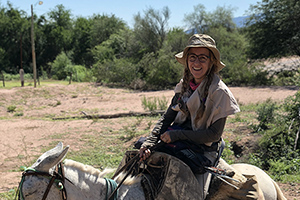 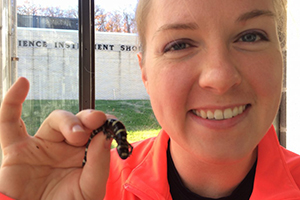 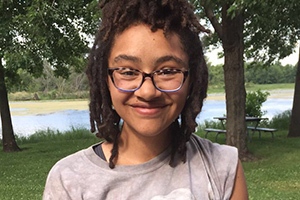 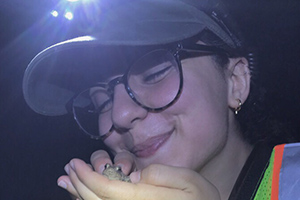 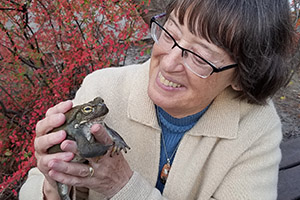 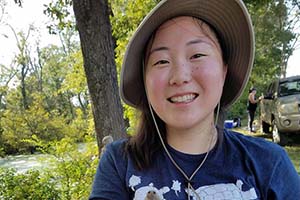 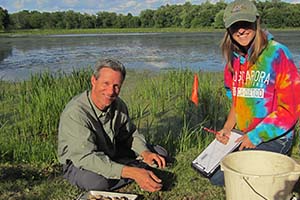 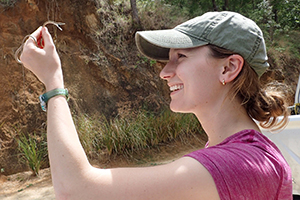 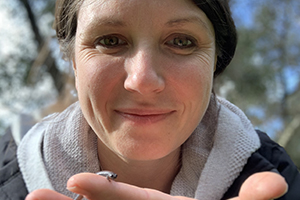